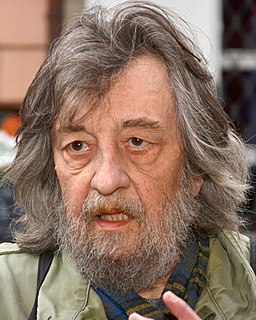 I first met Josef Janda at Prague airport in August 1991, with his friend and fellow surrealist Jakub Effenberger. I knew Josef’s name from a poem in an anthology of translations in Dunganon. It soon became apparent that Josef took the business of foreign surrealists visiting Prague very seriously and he organised several lengthy walks around the city that, however long, and however picturesque, would always end in the cheapest pubs imaginable. Towards the end of our stay, Josef offered me an exhibition in Prague which led to my returning to Prague the following April.

My exhibition took place in the Junior Club, an important hangout for the dissidents under the old regime. Josef not only set up the exhibition, but got a poem of mine translated and wrote an article in a Czech daily newspaper that, rather amazingly, gave me equal space with Chagall and David Bowie. I started to realise that Josef was a more of a force in the Czech cultural scene than I had supposed, he was an unassuming man whose limited English led to long silences when he thought out what he was going to say.

I was not the only foreign surrealist to benefit from his kind efforts, a few years later he was asked to give poetry readings in Wales and he stayed with us in London, both on the way to and on his return from, Swansea. I later found out that his poetry readings had been a great success, with him speaking the poems in Czech and somebody then reading the translation. He left many friends and admirers in Swansea.

This led to an important exhibition at the Glyn Vivian Gallery in Swansea by the Czech and Slovak Surrealist Group in 1998, “Invention Imagination Interpretation”. The majority of British surrealists travelled to Swansea in order to meet the Czech surrealists and see their work at first hand. This was the first of a number of collaborative exhibitions that Josef helped to organise. One fruit of this was a volume of his poems translated into English and published by Dark Windows Press, Free Style. It was fascinating to at last see Josef’s poetic vision set out in English. The poems are usually humorous, curious fantasies of golems and werewolves populate a wasteland, sometimes with a deceptive air of solemnity and a genuine melancholy. The humour is dark and often concerned, at least partly with death. There is an anarchic a touch of Peret in his poetic voice and in his quietly savage irony such as here:

When a leg falls off a man

He can still hop on the other

And when the other falls off

He can easily roll down a hill.

It’s good to be an optimist

Even after death it’s best to stay close-lipped

And rot in bed silently.

I had been unable to travel much for several years and when my circumstances improved, I looked forward to returning to Prague and re-establishing contact and meeting with him again. Now that can never happen. Josef was a true poet, a true surrealist and a true friend. Many people will miss him, I am just one of that many.

Somebody has cut out an anti-collage from reality

It is in the shape of Josef Janda

And there is an absence in the world

In the shape of Josef Janda

The shadows of leaves

In the shape of birds

In the cellars of Prague

And the shadows of birds

In the shape of Josef Janda’s beard

And all the werewolves in the world

Will call to each other