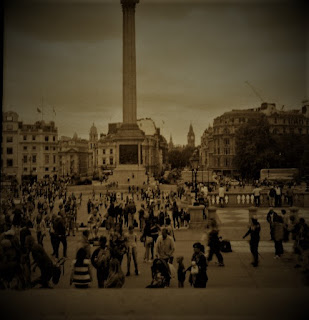 Vigilant readers of this blog (if they exist) will have noted a recurring theme around the question "what is surrealist time?" and consequently the meshing of time and space. I suggested that a model of discontinuous time might serve us better than say, the flow and duration of Bergson, that discontinuity, building upon Bachelard's Instant allowed a breach in the flow of capitalist time and this might in turn allow 'free time' to come into play.
Free time seems to require a consciousness of freedom, so not just that no demands are being made of our time by our bosses, external or internal (isn't the superego the ultimate boss?) but a break from the cycle of production and consumption - useless time, as it were. I didn't think that in saying this, I had reached some extraordinary originality, even in the way I stitched together pieces of a discourse, but I did feel it had some merit and was something that surrealists were not discussing enough, or in sufficient depth. (I may be wrong, but then I'd like to see a better dialogue about these matters in order to improve my own awareness.)
This 'free time' is, in itself, clearly inadequate. It suggests a moment of eruption of freedom and then a return to the life of work and effective servitude to capitalism, even in one's officially sanctified leisure. Nevertheless, it is also, I think, necessary. Not one eruption, but many, together or not, slowly weakening the fabric of oppression, allowing the idea of real freedom to permeate. When I had thought this through to some level of coherence, I saw that it had obvious parallels with Hakim Bey's Temporary Autonomous Zone. (See: https://en.wikipedia.org/wiki/Temporary_Autonomous_Zone) but then I had not considered that I was saying anything astoundingly original, only articulating it in a different way and context.
Most spaces are, in various ways, alienated. They are owned and privatised, fenced off. We are allowed runways from space to space in order to go to and return for work, we can enter spaces as employees, or as consumers, the spaces we are allowed to roam freely are very limited, even in the countryside, most space is owned and fenced off. This has all become more evident over the last year, as many restrictions during the Covid 19 pandemic have made many spaces less available than ever before, and at various times we have not even been able to loiter, but have to move on, exercise, spend our money and return home.
Regarding the last, I am not complaining so much, as I am not a conspiracy theorist who believes the pandemic to be fake. I do, however, note that our freedom was already limited and is far more curtailed, and we will have to be sure that this curtailment is not installed as a regular feature of our lives post-Covid. people can have terribly short memories, and the memory of greater freedom can pass into legend in a disturbingly short time.
Fortunately for me, a modest blog post like this is not expected to set everything right or provide the perfect theory. (PHEW!) However, I think it is worth reminding people of the importance of reclaiming our spaces, take wandering to the limits, even now, and as Covid 19 becomes a memory, reclaim our freedom of public spaces and start to enlarge them, discover new zones of freedom, make the world at large a playground.
Posted by LATENT NEWS at 04:44